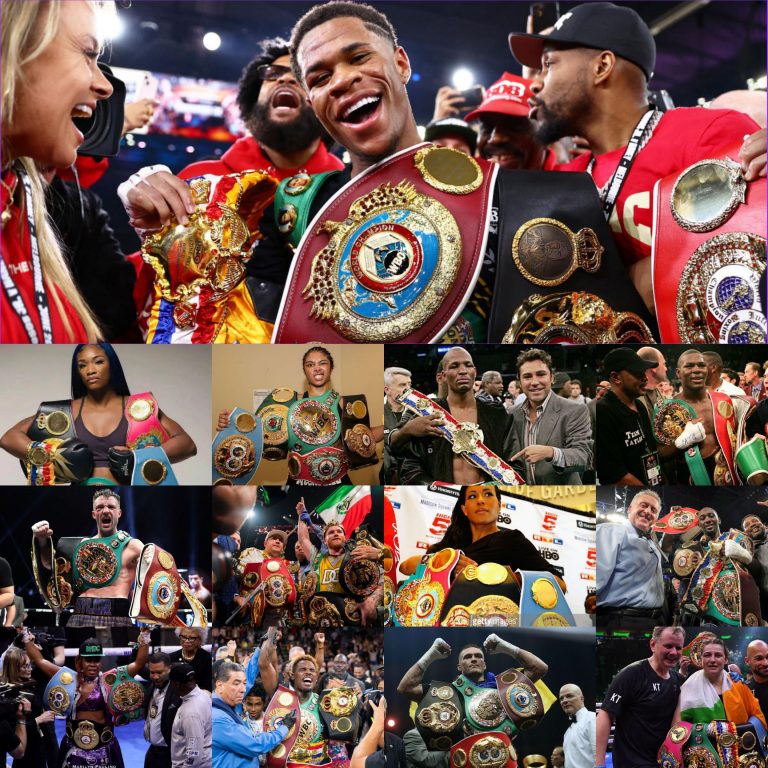 This post is a mid 2022 update to past and current Undisputed Boxing Champions of the 4 Belt era. As well as Undisputed Championship Fights which may take place by the end of 2023.

In the first instalment to this Undisputed series: ‘Undisputed Part 1: 2020’s The Decade of 1 Champ in Boxing?’ Focused on the history of Boxing sanctioning bodies who award the belts. Explaining how the sport went from one recognised Champion to the multiple Champions of each weight class we have today. The second part: ‘Undisputed Part 2: Is it Relevant in Modern Boxing?’. Shows the pitfalls of being an Undisputed Champion in current times.

Since the first post we have had 3 newly crowned Kings and Queens of their weight class. As well as 2 Undisputed title defences, which means in the last 2 months the world of Boxing has witnessed 5 Undisputed Championship Fights! Which in the last 2 decades to have so many significant Fights in such a short period is almost unprecedented.

This post will feature many Boxing Greats with some external video links to there great career highlights.

Is the first Champion to kick off the 4 Major sanctioning Belt era. In his Mega Unification fight with the then Golden Boy of Boxing and future business partner: Oscar De La Hoya. He successfully defended all 4 titles until he eventually lost the belts in his second defence.

Is the man who dethroned B-Hop from being King of the Middleweights by split decision. However for reasons which unfortunately come up in the sport. Some of which are mentioned in the previous post to this series. By the time they had their rematch to settle the close contest less than 6 months later. Jermaine had lost the IBF title outside of the ring and when he beat Hopkins the second time he had 3 of the belts.

In just under 6 years of holding all the belts, Cecilia managed to defend her titles an unprecedented 10 incredible times. A feat which is unlikely to be duplicated or beaten on the male side. In her second defence she even won a vacant IBO World Championship which she managed to defend 8 times too. Which if my theory of a possible 5th major sanctioning body being established in the sport becomes a reality. The IBO seems to be the forerunner and she can claim to be the first Undisputed Boxing Champion of the 5 Belt era! If the powers that be retrospect the time she won and held all the belts to when the 5th Belt is legitimised. For her longevity she is the most successful Undisputed Champion of the last 2 decades and a pioneer for the Sport.

Is the first Champion to hold all 4 titles at Light Welterweight. Once he became Undisputed he decided to move up for a title fight at Welterweight and has been Champion ever since. He is due to feature in the other part of this post.

This undefeated Ukrainian boxer managed to defend his belt once before moving to Heavyweight. Making many debates about who’s the best to ever do it at Cruiserweight between himself and Evander ‘The Real Deal’ Holyfield. If he gets past his August 20th rematch against Anthony Joshua. He can seriously challenge for that elusive 4th Belt in the not so distant future.

The Gwoat: Greatest Woman Of All Time. A title she has given herself just like the Goat himself decades before her Muhammad Ali. She has good reasons to tag herself with such a title. She is a two time summer Olympics Gold medallist. She is the first and so far only boxer to ever become Undisputed in two weight classes in the 4 Belt era. The first to do so since Evander Holyfield who did it in the 3 Belt era. She has never lost her belts in the ring but more so for not fulfilling the sanctioning bodies mandatory request. An unfortunate theme which stops fighters from retaining their well deserved Undisputed status.

Won the belt in a 2021 Fight of the Year Contender against a very game Champion, José Ramírez. Who since then managed to successfully defend his title in a split decision win earlier this year. However the sanctioning bodies ugly heads appeared to spoil his accomplishments. By forcing him to vacate his WBA Championship in May of this year. A month later he then vacated his WBC Championship for again not being able to meet their mandatory obligations. Which seems a bit unusual considering Canelo hasn’t made one defence of his Super Middleweight title since November of 2021. 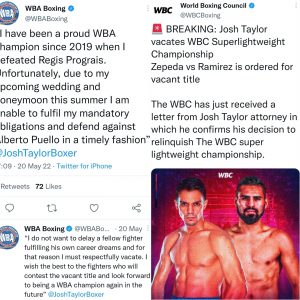 Since becoming Undisputed the summer Olympic games Gold medallist has successfully defended her titles 7 times. These defences included great fights that any true fan of combat sports will enjoy. One win over olympic games rival Natasha Jonas who she beat in the quarter finals of the games. As well as the biggest women’s Boxing fight held so far against Amanda Serrano.

One of the sport’s most promising fight commentators. Who in my opinion does a better job than her Dazn male counterparts at times. She recently had her 2nd defence which was a scrappy affair for as long as it lasted. She was literally throwing every punch with mean intent that by the 3rd round her opponent quit at her stoll.

The Biggest name in the sport has since lost a fight by daring to be great. By challenging Dimitrii Bivol for his Light Heavyweight title.

Won the Undisputed title on the same night as the Taylor Serrano fight. Her only loss was on both their professional debuts against Claressa Shields. Since then both have become friends however with her recent success they may cross paths in the ring in the future.

The lighter weight twin brother won a thriller contest by the way of knockout to become Undisputed. He has already been threatened with mandatories days after winning all 4 belts. He has a murderous row of contenders who he could be fighting in the next 12 months. If he decides to stay in the Super Welterweight division.

The Dream is the youngest in the list and hushed all critics by ending the whole WBC Lightweight mess. By becoming the Undisputed Champion of the division in enemy territory.

This is the only confirmed fight on this list. This fight will headline a historic all female card. Which will feature Mikaela Mayer vs Alycia Baumgardner as the co-main. With the winner of this Unification bout destined to make their own way to becoming Undisputed Champion of the Junior Lightweight division. 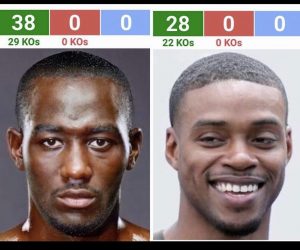 The most highly anticipated Undisputed Unification fight in the Boxing for the hardcore fans. With the two fighters resumes and high skill levels. This could potentially be a classic likened to Sugar Ray Leonard vs Thomas Hearns I or Marvellous Marvin Hagler vs Hearns. What adds more excitement two these elite Champions fighting in their primes. Plus anytime Errol Spence is asked about the potential fight. He is adamant the fight is the only one he wants for all the belts and it will happen in 2022! 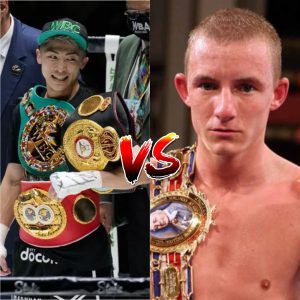 I never like to prejudge in Fight sports however the Monster from Japan seems to have his sights on one more belt. Unfortunately for Butler he is the holder for that belt which seems inevitable for it to be taken from him by way of knockout. Unless he has a Buster Douglas performance of the ages when he pulled off the biggest upset in Boxing History. Beating and stopping then undefeated and perceived unstoppable Iron MikeTyson in his prime. Which ironically happened in Japan over three decades ago. 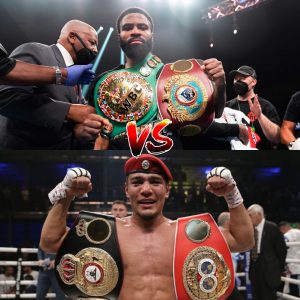 This fight must be next for the Super Bantamweight division. Which will most likely be hosted by the Showtime network if it doesn’t go to purse bid. Both fighters have two belts each. Both look impressive in their last few fights. Both fighters say Undisputed is the only fight they want next! 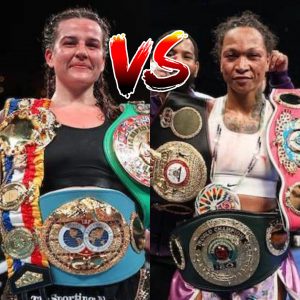 These two super Lightweights could see each other in the ring soon. As they are both in their 30s and realise with the increased fan fair to the women’s game. Becoming the Queen Bee of their division can only add to their profile. Both have two belts a piece and both in good form. 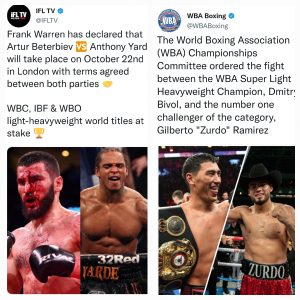 This first unification fight to be the first Undisputed Light Heavyweight Champion since the Great Roy Jones Jr. Seems inevitable as long as boxing politics and ‘politricks’ are at bay. The KO machine Beterbiev who holds 3 of 4 belts has a mandatory defence booked this October 2022. With East London’s hard hitting contender Anthony Yarde. Bivol will most likely have another defence which could be a mandatory or wait for the big money rematch against Canelo. Who will be out avenge his second career loss and demotion of Pound for Pound Best.

However with this recent order from the WBA we may see 44-0 Gilberto ‘Zurdo’ Ramirez fight Bivol this Autumn. Which brings more excitement for an Undisputed Light Heavyweight future Champion. Check out a previous post which took a deep dive in the Light Heavyweight division… Click Here 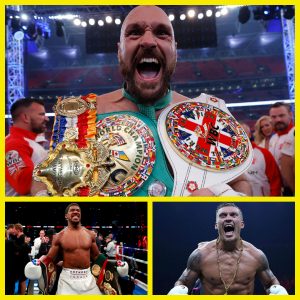 Tyson Fury the Lineal Heavyweight Champion has announced his retirement after his last KO defence. Yet the WBC still recognise him as their active Champion. Thus like the popular Dumb and Dumber movie meme: WBC, Top Rank, Queensberry promotions and the Boxing World are hoping there’s a chance he will fight again for the Big One.

The potential opponent who has the other 3 belts will be having a rematch on August 20th 2022. One is the biggest money maker in Heavyweight Boxing since Mike Tyson and Domestic rival; Anthony Joshua. The other is an Undefeated former Cruiserweight Undisputed Champion. Who is looking to replicate his great predecessor Evander Holyfield to become two weight class Undisputed Champion.

Side thought (Paul Ponder), which male Champion could be a two time Champion first? Terrence Crawford or Oleksandr Usyk. Both have a top opponent to beat to get all the titles. However Crawford Undisputed shot will probably happen next. Yet what if he follows in the same fashion as Terrence again and becomes Undisputed a year plus after him.

Either way the last 5 years has been the most exciting the Heavyweight division has been since the 90s. Thus it will only be right this era ends with an Undisputed Champion for the weight class. The way Lennox Lewis ended the 90s having all three belts.

Now there are a few defences lined up like Canelo first Super Middleweight title defence with his biggest rival: Gennadiy Gennadyevich Golovkin, on September 17th. However the previous list is more focused on Undisputed unification fights. Following on from the first and popular instalment: ‘Undisputed Part 1: 2020’s The Decade of 1 Champ in Boxing?’. This recent trend and need for elite boxers to become Undisputed for notoriety and legacy. Over poorly matched mandatories or bigger name fights. Can lead us to believe before the decade is over we will see more Boxing Undisputed Unification fights.